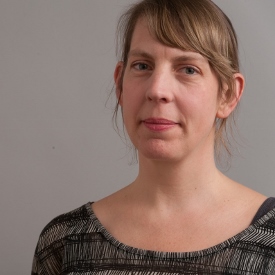 With Power to the Pixel’s Cross-Media Forum little over a month away, we continue to look ahead to the event with members of The Pixel Pitch Jury, the panel of international experts who will decide which project is most deserving of ARTE’s £6,000 Pixel Pitch Prize. This time, Ingrid Kopp, Director of Digital Initiatives at the Tribeca Film Institute in New York, explains how cross-media projects can foster true civic dialogue when they are designed to empower their audiences.

Power to the Pixel: What qualities will you be looking for in the projects you will be judging at The Pixel Market?

Ingrid Kopp: The story and the creative approach are always the most important things. I love to see people experimenting with new technologies and trying new things but it’s very important for me that the story leads and that there is a strong sense of creative vision. I’m also very drawn to projects that think about ways for an audience to be involved and that make people feel empowered through the interaction. One of the really wonderful things about cross-media projects is their capacity for achieving this.

I should also add that I’m really excited about the multiplicity of approaches in this space and the ways in which different industries are colliding and converging with each other – it makes writing guidelines and rules and regulations very tricky (I’m constantly tripping over terminology) but it means that I am constantly challenged and inspired, learning new things as I go and getting to work with teams that do everything from beautiful cinematography to beautiful code.

PttP: What particular expertise and experience do you bring to the Jury?

IK: I’ve been working in media for over 13 years. My background is in documentaries, beginning at Channel 4 Television in the UK, and I’ve always had a passion for creative non-fiction in all its forms. I was Editor-in-Chief of Shooting People [the independent filmmakers’ network] in the US for many years, starting in 2006 when social media really exploded which got me interested in how technology and the web were affecting storytelling and the ways in which audiences interact with media. I started writing and speaking on this subject which ultimately led me to my current job as Director of Digital Initiatives at the Tribeca Film Institute (TFI) and to my work with the TFI New Media Fund.

PttP: Citizenship and creativity are core values at TFI – could you say a bit more about the ways in which cross-media producers you have supported have built these into their work? Are there particular examples or models you would point to?

IK: We are constantly thinking about how media can reach and be created by under-served audiences at TFI. I am also very interested in the idea of a maker culture – giving everyone permission to look under the hood, pull things apart and put them back together or remix them into something new. This is one of the most exciting things about the web for me and we are working on a series of hackathons with creators, coders and designers to explore new ways of making things in this spirit.

As far as the TFI New Media Fund goes, with the support of the Ford Foundation we are committed to supporting projects that engage with issues of social justice and human rights around the world. Last year, our inaugural year, we supported 18 Days in Egypt, an interactive, crowd-sourced project where people can tell their own stories about the Egyptian revolution and what has happened since. We also supported Interrupt Violence, an initiative that came out of Steve James’ The Interrupters, and that will tell the stories of people who have died from gun violence and encourage communities to take action in American cities. This year we are supporting Laika’s Adventure, a project from Lance Weiler that will spark the creativity and education skills of children as a robot explores the world, collecting data on climate change.

The projects we have funded are all very different in terms of subject matter and approach but they share a commitment to inspire change, give people multiple entry points into a story and reach people who would not necessarily watch a documentary on television for example. This is all part of our commitment to civic dialogue and creating media that everyone can feel part of in some way, whether they are making it, contributing to it, remixing it, interacting with it or sitting back and watching it (we like that too!). When I think about user experience I think about all of these things.

PttP: Can you share your thoughts about The Pixel Market and the prizes which will be awarded there – what is the significance of such events and awards for producers?

IK: It’s hugely important that producers get an opportunity to pitch their projects, meet other people in this emerging and constantly evolving field and find the support they need, financial or otherwise, to get their work made and out into the world. There isn’t as much of an established infrastructure for this work, which is also what makes it so exciting, but it means that the usual paths of funding, festival exposure, press, distribution etc are simply not there. This means that producers with great ideas and solid teams may still be facing an uphill battle. Events like The Pixel Market are a vital part of creating a space for interesting ideas and creative producers to be nurtured and supported – and for creating a community around this work. I am thrilled to be attending for the first time this year.