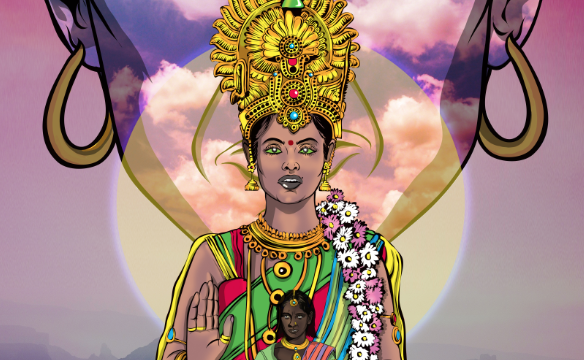 “I broke all the Holy Grails of interactive.”

“I broke all the Holy Grails of interactive. I have no film, I have no App and I don’t have a website” – former Pixel Market participant Ram Devineni talks about the intricacies of developing and financing augmented reality comic book Priya’s Shakti.

“Half the downloads have been from outside India. This kind of surprised me because I saw it as a very Indian project, made by Indians for Indians, but it’s resonated with people all over the world,” says New York-based Indian-American director and producer Ram Devineni, who operates under the Rattapallax Inc. banner.

The launch of the comic book is the first step in a larger educational programme tackling GBV aimed at school children in India. The project was born in response to the horrific gang rape and murder of 23-year-old medical student Jyoti Singh in Delhi in December 2012, which prompted outrage and debate about India’s culture of GBV.

Taking inspiration from Hindu mythology, the comic book tackles the issue through the tale of a gang-rape survivor Priya who turns to the Goddess Parvati for help. A series of blipps, or encoded images, enable readers to access another layer of content, including interviews with rape survivors, vox pops, the remix video and audio stories.

Genesis
Devineni initially responded to the 2012 tragedy with a remix of 1970s Bollywood movies, spliced together to give an anti-rape message – watch it here.

“I was inspired by DJ Spooky’s Rebirth of a Nation, a remix of D.W. Griffith’s Birth of a Nation, dealing with the issue of race in America,” he explains.  “I tried to do the same thing using old Bollywood films about Hindu mythology.”

He showed the work to New York artist Dan Goldman at a Meetup organised by StoryCode NYC, a key hub for the interactive community in the city. The garish colours and kitschy sets reminded him of a comic book.

“He was right!” says Devineni. “I started doing research into the Hindu mythology comic books of the 1970s which were hugely popular at the time.” Goldman would end up doing the artwork on the comic.

“A leitmotif in the comics was that a villager in a dire situation would call on the gods for help. I thought the problem of rape is a pretty dire situation so why not take the concept and re-imagine it to the modern world.”

Funding
Devineni officially launched the project at DOK Leipzig Net Lab in November 2012. “Everyone’s mouth dropped… they kept me there for 20 minutes at the end of the session… I knew then I had a powerful idea,” he says.

It marked the beginning of a near yearlong tour of interactive markets and labs across the globe but some eight months in Devineni had yet to secure any sizeable amounts of funding. The augmented reality comic book format made it difficult for broadcasters and interactive news sites to board the project, despite its topical nature.

“Everyone I showed the project to was totally wowed by it but they couldn’t figure out how they could fund it,” says Devineni. “Not a single broadcaster backed the project although all the commissioners loved it.”

At one point, he mulled the possibility of shooting a documentary as part of a tie-in with a potential broadcaster but later ditched the plan. “I was trying to retro-fit the project to meet the expectations and needs of the market,” he says. “The strength of the project was that it was very focused and that’s what ultimately made it successful.”

In the end, Devineni used his own money and private donations to initially bankroll the project and stitched together a patchwork of several smaller $5,000 to $10,000 grants.

“They were minimal grants but they started adding up and then the Tribeca Film Institute came in with $75,000 just three months before it was due to launch,” he explains, referring to the New York body’s interactive strand overseen by Ingrid Kopp.

Overall, he managed to raise $215,000 through a combination of private donations, grants and foundations and an Indiegogo campaign, which generated $35,000 for the outreach component of the project.

Blippar support
In a major coup, Devineni also secured the services of New York and London-based augmented reality market leader Blippar free-of-charge because of the innovative nature of the project.

“I sent an email to their info address not expecting to hear back. They replied within 12 hours saying, ‘this is a brilliant idea how can we help?” he says.

The timing of his email had been perfect. The company was on the cusp of opening offices in India and wanted a high-profile project to accompany the launch.

“They gave us access to their technology and developed some really innovative ‘blipps’ at no extra cost,” says Devineni. “It would have cost a ton of money if we had had to pay.”

The payback was that the comic book generated some 150 news stories mentioning Blippar in the first six weeks after the Mumbai launch.  “They were happy with the publicity and attention,” he says.

“I broke all the Holy Grails of interactive works. I have no film, I have no App and I don’t have a website,” he continues. “I think this is the way interactive storytelling and art is heading… increasingly breaking from traditional conventions.”

He suggests that markets and labs should start taking this shift on board when lining up potential investors.

“They need to start inviting partners from other places too… perhaps even bring in corporations, like Coca Cola,” says Devineni, who is now mulling corporate and brand tie-ins in India to help spread the word about the comic book.

Devineni stresses, however, that his time on the circuit was an important part of the development process.

“I met all the key people in interactive and people got to know who I was and the whole process helped elevate the project and get it taken seriously,” he says.

In addition, a number of the broadcast commissioners, who could not commit financially to the project, helped him connect with their organisations’ newsrooms and other media contacts, which was a boon when it came to promoting the comic book launch.

By the time, Devineni got to The Pixel Market in October 2014, Priya’s Shakti was in the final stages of production. The event proved useful as place to promote the project and connect with potential marketing contacts.

“At that point my focus was on promotion and marketing… we were just six weeks away from the launch. The comic book was done and a lot of the augmented reality has been done too so I had a lot to show,” says Devineni.

At The Pixel Market, meetings with Rebecca Smit of German broadcaster Bayerischer Rundfunk led to an article in the German press and a news story on Arte TV, while BBC producer Georgia Moseley suggested contacts which lead to a BBC news feature.

Future plans
Ironically, Devineni is now in talks with three animation companies about production of a short film inspired by the comic book, which could connect the project to broadcasters and interactive news sites.

“I was approached by three companies from three different countries in Cannes,” says Devineni. “It’s an exciting development with plenty of funding potential… and yes, perhaps it would have been better if it had come about earlier.”

He is also in talks with a major world institution that would like to adapt the Priya’s Shakti model to fit other countries and cultures where sexual violence is a problem as part of a global educational campaign.

‘That would be a major development taking the project to a whole other scale,” he comments.

Outreach Aspirations
In the meantime, Devineni is pushing on with his original aim to fight GBV in India through the education of its youth on the subject. He is working with the leading expert on social impact, Lina Srivastava, who was instrumental in the overall design and making sure the comic book had clear outreach in India.

Working closely with outreach partner Apne Aap Women Worldwide, a grassroots Indian charity aimed at empowering girls and women set-up by a group of former sex workers, Devineni is currently developing a school curriculum with a test group of 10,000 students.

“The aim is to print one million copies of the comic and distribute it into schools where it can be used as part of a curriculum on women’s equality, gender rights and sexual violence,” says Devineni. “The outreach side is as innovative as the comic book and we’re figuring it out as we go along.”

Alongside this Devineni is also devising a second comic book in the series. Priya’s Shakti is a project that looks set to run and run.

Applications for this year’s Pixel Market are now open. Meet with over 100 potential finance, distribution and co-production partners plus win cash prizes and more. Head to our applications page to find out more and to apply.