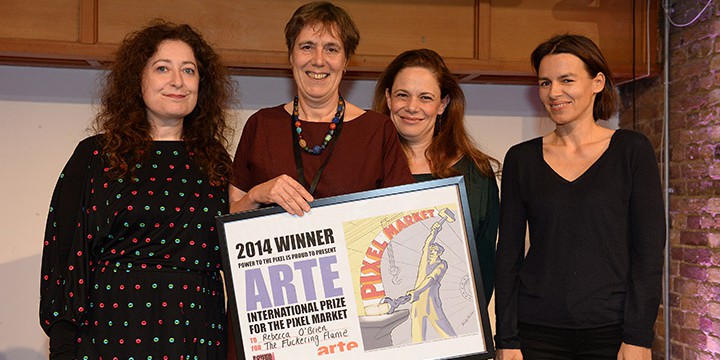 We are over the moon to announce Rebecca O’Brien with her project The Flickering Flame as the winner of this year’s €6,000 ARTE International Prize for The Pixel Market! O’Brien presented The Flickering Flame at The Pixel Market Finance Forum (8 Oct) to a jury of international financiers, distributors and platforms in front of a 400 strong live audience. The project by the Cannes Film Festival Palme d’Or award-winning producer is an interactive documentary that explores fifty years of uncompromising films from the legendary Ken Loach through this personal archive.

We also congratulate the prize winners of our additional Pixel Market prizes. They include:

We’re also delighted to announce Victoria Mapplebeck as the winner of The Pixel Lab prize worth €3,000 for her project Text Me. Mapplebeck attended the first workshop of The Pixel Lab in The Black Forest, Germany earlier this year before receiving three months of distance mentoring. The project first popped onto the Power to the Pixel radar in 2013 when it was selected for The Pixel Pitch and won the Merging Media Pixel Market Prize.

Congratulations to all of this year’s prize winners!